Earlier this year we took Californian clients Bob and his grandsons Andrew and Zachary to visit one of our favourite Vouvray producers. Andrew's father is a winemaker and he is studying oenology at college. We thought they would get a lot from a visit to a local wine producer, and even curtailed our visit to the fabulous Chateau of Chenonceau in order to have more time at the winery. 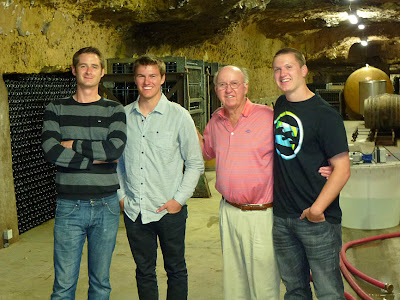 It proved to be a good move. Andrew and Charles, one of the winery's young staff members, hit it off immediately. It was a real pleasure to see these two interacting - from different cultural backgrounds, but with a shared passion for wine. It was clear that Andrew got a lot from talking 'shop' with Charles, and the wine itself was quite a revelation for him. He wasn't familiar with Vouvray whites at all, and had no idea they would be so complex, varied and interesting - and all from a single grape variety.

If you are interested in wine and would like a private tour of a small family run winery that produces a range of very reasonably priced but high quality wines, then email us.

Our thanks to the client R. Drinkward for his kind permission to use this photo, and to Carol Wexler of Cadence Travel, La Jolla, California, for sending us such nice clients.
Email ThisBlogThis!Share to TwitterShare to FacebookShare to Pinterest

We took Caryn and Joe, from Washington DC, to the Château de Montpoupon as part of their day trip with us. It's the sort of smaller, less well known château that many people don't make the time to visit. But sometimes these smaller places give you a much richer and more personal experience.

After exchanging a few words with the owner, Count Louvencourt, who popped his head out of an upper storey window to make sure we weren't going to miss part of the display, we crossed the courtyard to where we had noticed a man dressed in splendid red velvet regalia. 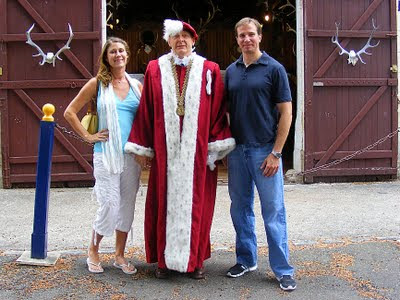 This gentleman turned out to be a retired French general, now a member of the well regarded la Gourmandière wine co-operative in Francueil, just down the road from the more famous château of Chenonceaux. The co-operative is rather like a guild and winemakers were there for a meeting, dressed in their formal costumes. The general was affable and knew Washington well. It was a delightful and genuine interlude.

If you would like the possibility of encounters like this, why not email us and ask us to design you a day trip?
Email ThisBlogThis!Share to TwitterShare to FacebookShare to Pinterest

Meeting the Owner at Villandry

This summer one of our clients was landscape gardener Sue Pearlstine from Several Seasons. She requested 5 days of nothing but gardens and that's just what we designed for her. Wherever possible we arranged for her to meet the owners or the gardeners too. 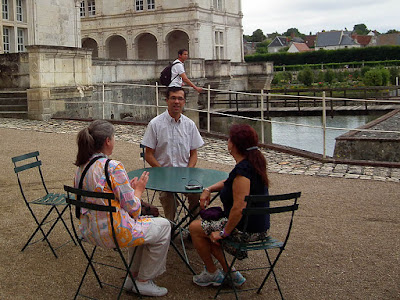 At Villandry, Henri Carvallo, from the third generation of his family to run this world famous garden, was kind enough to give us half an hour of his time. He explained that the garden is entirely self-supporting, with entry fees covering the cost of salaries and garden upkeep. This is testimony to just how popular the gardens are, but also to how good a manager he is. He learnt entirely by watching his father and grandfather and by working with the team of 9 dedicated gardeners all his life. It is extremely rare for an historic site like this to receive no government grants at all, but Monsieur Carvallo says he no longer applies for them as the place earns enough not to need them. He also mentioned that he has recently been invited to join an advisory committee at Longwood Gardens in Pennsylvania. Not only can he pass on his expertise to American colleagues, but he confided that in return he hopes to pick up tips to improve Villandry's already excellent customer service, as this an area in which he believes that America excels.

It was a real privilege to be given these insights into managing such an influential garden, and we are very grateful to Monsieur Carvallo for his generosity and openness. Sue appreciated the extra effort that we went to in order to create a tour that fulfilled a lifetime dream and if you are interested in a tour that gives you more than the standard tourist visits email us and we can work with you to design your exclusive tour.
Email ThisBlogThis!Share to TwitterShare to FacebookShare to Pinterest
Newer Posts Older Posts Home
Subscribe to: Posts (Atom)