France is famous for it's cuisine -- so much so that it is UNESCO World Heritage Listed. Outside of France everyone thinks of elaborate and elegantly presented meals in Michelin Starred establishments. But French cuisine is much more than that. There is a solid and ongoing tradition of peasant food, designed to make use of every available resource. Nose to tail eating in France is alive and well. Our clients may be grossed out by the sight of offal at the butchers and on the menu, but it's an important part of what experiencing France is about. We would encourage (but not force) clients to try something new.


A typical November display in a butchers window in the Loire Valley. 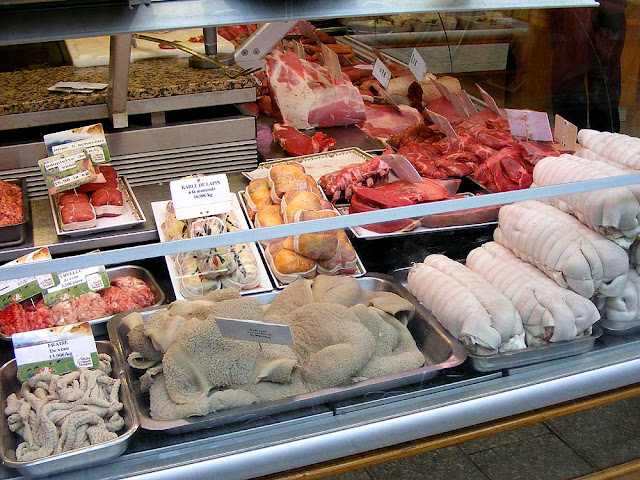 If you aren't squeamish and would like to learn more about French country cooking, take a tour with us in November, officially designated 'Offal Month' in France. You can email or use our contact form and we will design a tour for you that includes talking to a specialist offal butcher at one of the best farmers markets in the Loire Valley.
Email ThisBlogThis!Share to TwitterShare to FacebookShare to Pinterest
Newer Post Older Post Home